Solar energy is the first step in creating a cleaner, brighter future for generations to come. Being a clean, renewable, emmissions-free engery source, solar actually helps to protect the environment. So give us a chance to make it for a brighter future. 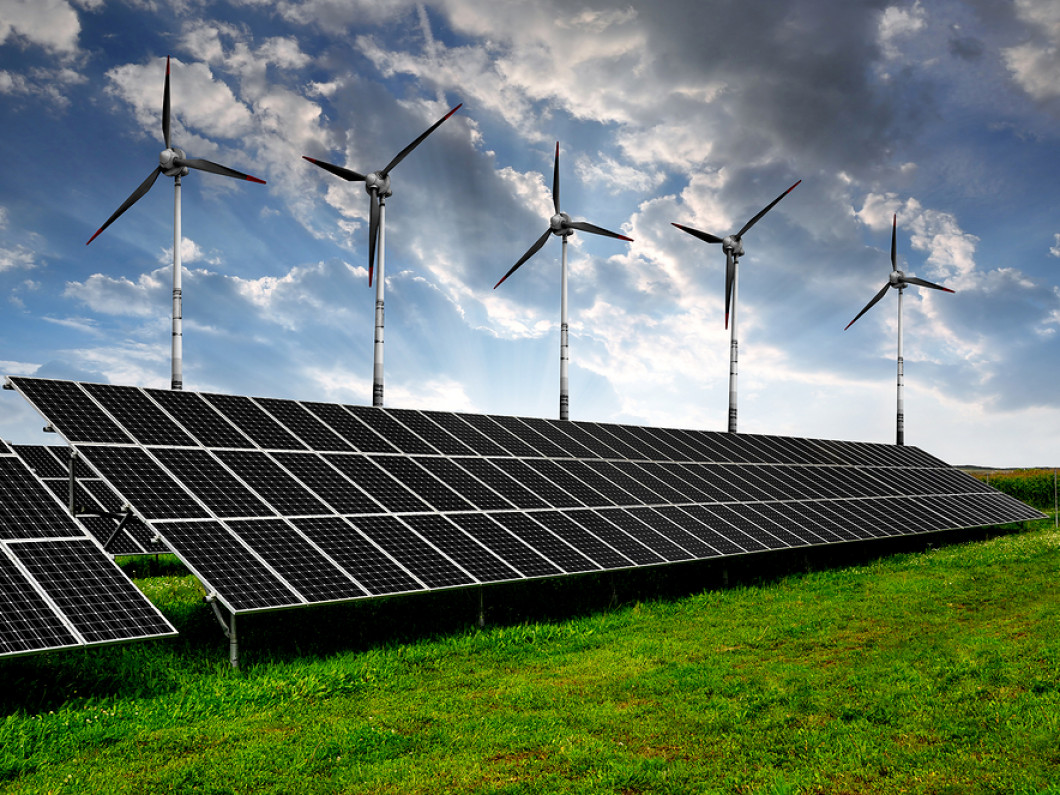 Benefits of Renewable Energy Use

Renewable energy — wind, solar, geothermal, hydroelectric, and biomass — provides substantial benefits for our climate, our health, and our economy:

Each source of renewable energy has unique benefits and costs; this page explores the many benefits associated with these energy technologies. For more information on their potential impacts — including effective solutions to mitigate or avoid them entirely — see The Environmental Impacts of Renewable Energy Technologies. Little to No Global Warming Emissions

According to data aggregated by the International Panel on Climate Change, life-cycle global warming emissions associated with renewable energy—including manufacturing, installation, operation and maintenance, and dismantling and decommissioning—are minimal [3]. Compared with natural gas, which emits between 0.6 and 2 pounds of carbon dioxide equivalent per kilowatt-hour (CO2E/kWh), and coal, which emits between 1.4 and 3.6 pounds of CO2E/kWh, wind emits only 0.02 to 0.04 pounds of CO2E/kWh, solar 0.07 to 0.2, geothermal 0.1 to 0.2, and hydroelectric between 0.1 and 0.5. Renewable electricity generation from biomass can have a wide range of global warming emissions depending on the resource and how it is harvested. Sustainably sourced biomass has a low emissions footprint, while unsustainable sources of biomass can generate significant global warming emissions.

Increasing the supply of renewable energy would allow us to replace carbon-intensive energy sources and significantly reduce U.S. global warming emissions. For example, a 2009 UCS analysis found that a 25 percent by 2025 national renewable electricity standard would lower power plant CO2 emissions 277 million metric tons annually by 2025—the equivalent of the annual output from 70 typical (600 MW) new coal plants [4]. In addition, a ground-breaking study by the U.S. Department of Energy's National Renewable Energy Laboratory explored the feasibility and environmental impacts associated with generating 80 percent of the country’s electricity from renewable sources by 2050 and found that global warming emissions from electricity production could be reduced by approximately 81 percent [5].

Generating electricity from renewable energy rather than fossil fuels offers significant public health benefits. The air and water pollution emitted by coal and natural gas plants is linked to breathing problems, neurological damage, heart attacks, and cancer. Replacing fossil fuels with renewable energy has been found to reduce premature mortality and lost workdays, and it reduces overall healthcare costs [6]. The aggregate national economic impact associated with these health impacts of fossil fuels is between $361.7 and $886.5 billion, or between 2.5 percent and 6 percent of gross domestic product (GDP). Wind, solar, and hydroelectric systems generate electricity with no associated air pollution emissions.

While geothermal and biomass energy systems emit some air pollutants, total air emissions are generally much lower than those of coal- and natural gas-fired power plants. In addition, wind and solar energy require essentially no water to operate and thus do not pollute water resources or strain supply by competing with agriculture, drinking water systems, or other important water needs. In contrast, fossil fuels can have a significant impact on water resources. For example, both coal mining and natural gas drilling can pollute sources of drinking water. Natural gas extraction by hydraulic fracturing (fracking) requires large amounts of water and all thermal power plants, including those powered by coal, gas, and oil, withdraw and consume water for cooling. Biomass and geothermal power plants, like coal- and natural gas-fired power plants, require water for cooling. In addition, hydroelectric power plants impact river ecosystems both upstream and downstream from the dam. However, NREL's 80 percent by 2050 renewable energy study, which included biomass and geothermal, found that water withdrawals would decrease 51 percent to 58 percent by 2050 and water consumption would be reduced by 47 percent to 55 percent [7].

Today, renewable energy provides only a tiny fraction of its potential electricity output in the United States and worldwide. But numerous studies have repeatedly shown that renewable energy can be rapidly deployed to provide a significant share of future electricity needs, even after accounting for potential constraints [9]. 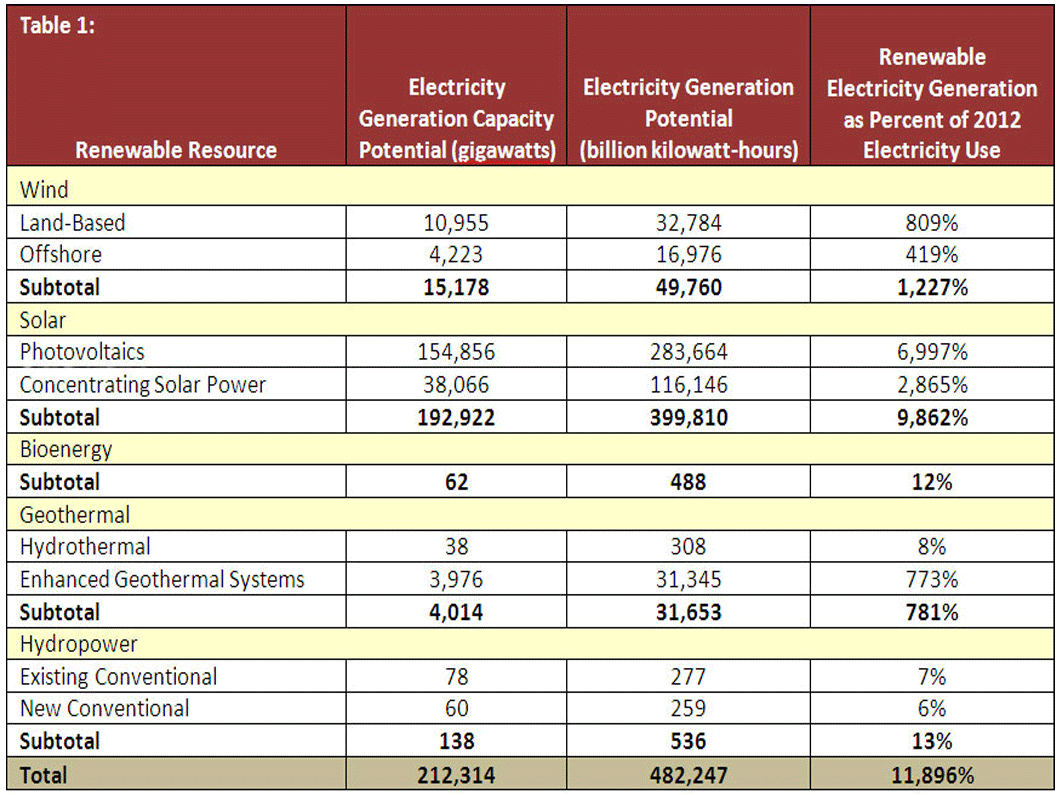 A Vast and Inexhaustible Energy Supply

Throughout the United States, strong winds, sunny skies, plant residues, heat from the earth, and fast-moving water can each provide a vast and constantly replenished energy resource supply. These diverse sources of renewable energy have the technical potential to provide all the electricity the nation needs many times over. Estimates of the technical potential of each renewable energy source are based on their overall availability given certain technological and environmental constraints [8]. In 2012, NREL found that together, renewable energy sources have the technical potential to supply 482,247 billion kilowatt-hours of electricity annually (see Table 1). This amount is 118 times the amount of electricity the nation currently consumes. However, it is important to note that not all of this technical potential can be tapped due to conflicting land use needs, the higher short-term costs of those resources, constraints on ramping up their use such as limits on transmission capacity, barriers to public acceptance, and other hurdles.

Jobs and Other Economic Benefits

Compared with fossil fuel technologies, which are typically mechanized and capital intensive, the renewable energy industry is more labor-intensive. This means that, on average, more jobs are created for each unit of electricity generated from renewable sources than from fossil fuels. Renewable energy already supports thousands of jobs in the United States. For example, in 2011, the wind energy industry directly employed 75,000 full-time-equivalent employees in a variety of capacities, including manufacturing, project development, construction and turbine installation, operations and maintenance, transportation and logistics, and financial, legal, and consulting services [10]. More than 500 factories in the United States manufacture parts for wind turbines, and the amount of domestically manufactured equipment used in wind turbines has grown dramatically in recent years: from 35 percent in 2006 to 70 percent in 2011 [11, 12]. Other renewable energy technologies employ even more workers. In 2011, the solar industry employed approximately 100,000 people on a part-time or full-time basis, including jobs in solar installation, manufacturing, and sales [13]; the hydroelectric power industry employed approximately 250,000 people in 2009 [14]; and in 2010 the geothermal industry employed 5,200 people [15].

In addition to creating new jobs, increasing our use of renewable energy offers other important economic development benefits. Local governments collect property and income taxes and other payments from renewable energy project owners. These revenues can help support vital public services, especially in rural communities where projects are often located. Owners of the land on which wind projects are built also often receive lease payments ranging from $3,000 to $6,000 per megawatt of installed capacity, as well as payments for power line easements and road rights-of-way. Or they may earn royalties based on the project’s annual revenues. Similarly, farmers and rural landowners can generate new sources of supplemental income by producing feedstocks for biomass power facilities. UCS analysis found that a 25 by 2025 national renewable electricity standard would stimulate $263.4 billion in new capital investment for renewable energy technologies, $13.5 billion in new landowner income biomass production and/or wind land lease payments, and $11.5 billion in new property tax revenue for local communities [18].

Renewable energy projects therefore keep money circulating within the local economy, and in most states renewable electricity production would reduce the need to spend money on importing coal and natural gas from other places. Thirty-eight states were net importers of coal in 2008—from other states and, increasingly, other countries: 16 states spent a total of more than $1.8 billion on coal from as far away as Colombia, Venezuela, and Indonesia, and 11 states spent more than $1 billion each on net coal imports [19]. 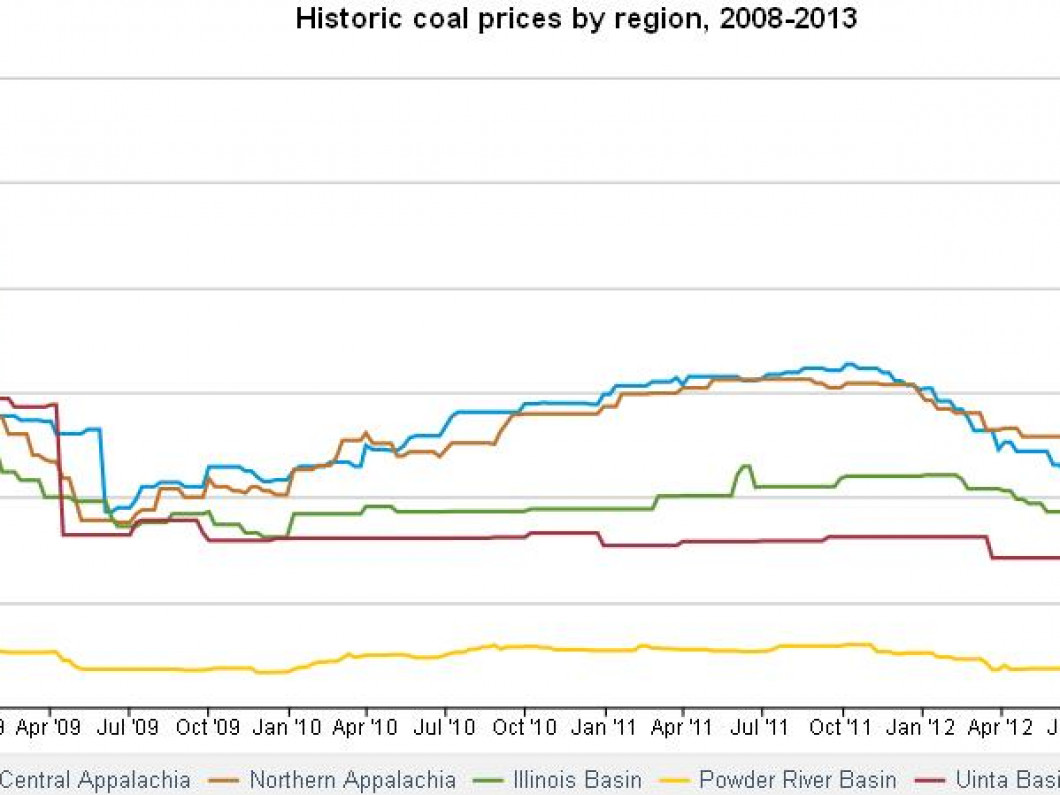 Renewable energy is providing affordable electricity across the country right now, and can help stabilize energy prices in the future. The costs of renewable energy technologies have declined steadily, and are projected to drop even more. For example, the average price of a solar panel has dropped almost 60 percent since 2011 [20]. The cost of generating electricity from wind dropped more than 20 percent between 2010 and 2012 and more than 80 percent since 1980 [21]. In areas with strong wind resources like Texas, wind power can compete directly with fossil fuels on costs [22]. The cost of renewable energy will decline even further as markets mature and companies increasingly take advantage of economies of scale. While renewable facilities require upfront investments to build, once built they operate at very low cost and, for most technologies, the fuel is free. As a result, renewable energy prices are relatively stable over time. UCS’s analysis of the economic benefits of a 25 percent renewable electricity standard found that such a policy would lead to 4.1 percent lower natural gas prices and 7.6 percent lower electricity prices by 2030 [23]. In contrast, fossil fuel prices can vary dramatically and are prone to substantial price swings. For example, there was a rapid increase in U.S. coal prices due to rising global demand before 2008, then a rapid fall after 2008 when global demands declined [24]. Likewise, natural gas prices have fluctuated greatly since 2000 [25]. 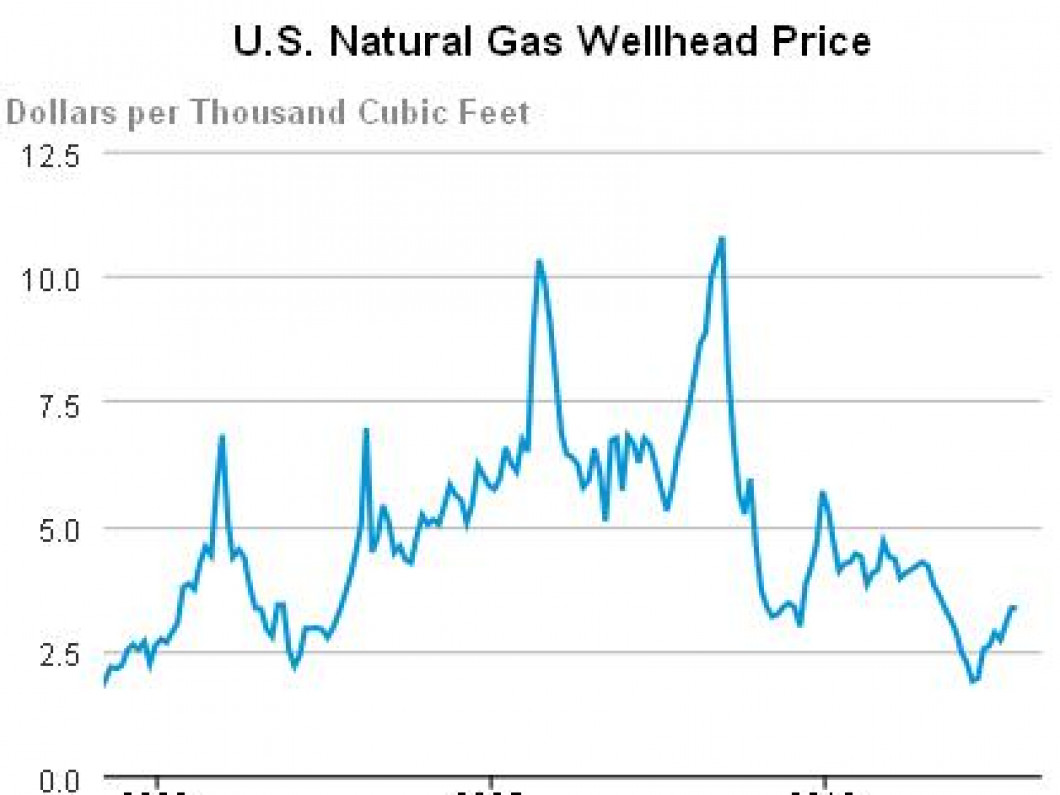 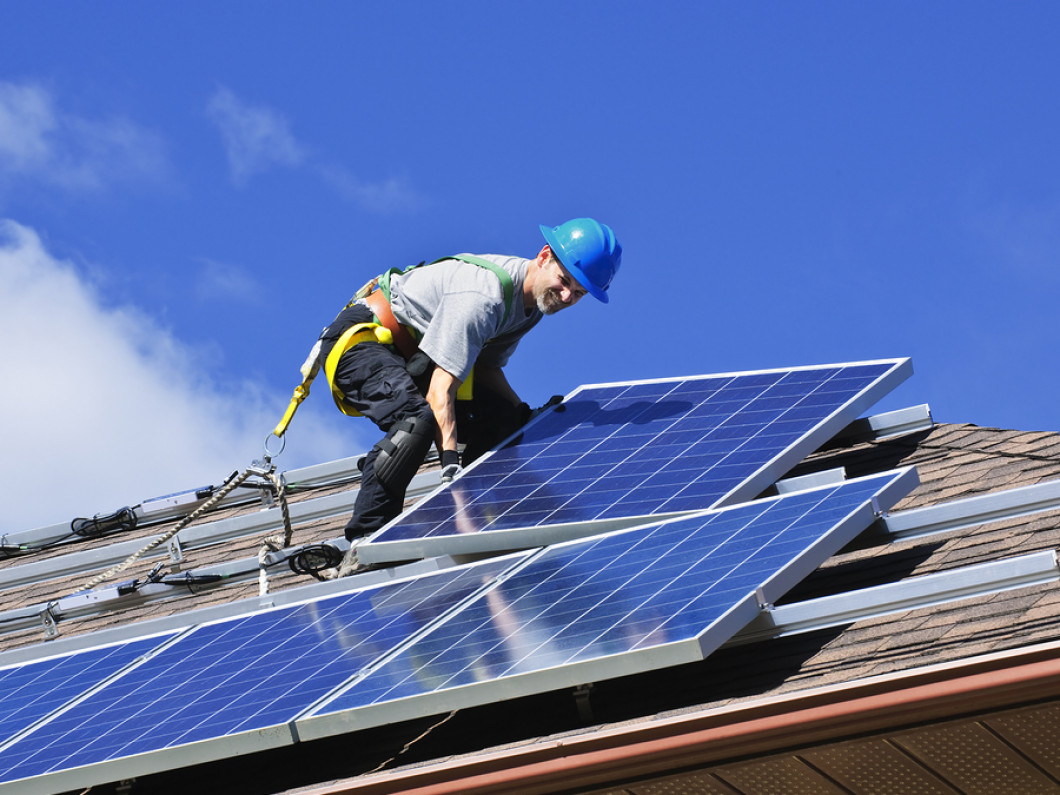 Wind and solar are less prone to large-scale failure because they are distributed and modular. Distributed systems are spread out over a large geographical area, so a severe weather event in one location will not cut off power to an entire region. Modular systems are composed of numerous individual wind turbines or solar arrays. Even if some of the equipment in the system is damaged, the rest can typically continue to operate. For example, in 2012 Hurricane Sandy damaged fossil fuel-dominated electric generation and distribution systems in New York and New Jersey and left millions of people without power. In contrast, renewable energy projects in the Northeast weathered Hurricane Sandy with minimal damage or disruption [26]. The risk of disruptive events will also increase in the future as droughts, heat waves, more intense storms, and increasingly severe wildfires become more frequent due to global warming. Renewable energy sources are more resilient than coal, natural gas, and nuclear power plants in the face of these sorts of extreme weather events. For example, coal, natural gas, and nuclear power depend on large amounts of water for cooling, and limited water availability during a severe drought or heat wave puts electricity generation at risk. Wind and solar photovoltaic systems do not require water to generate electricity, and they can help mitigate risks associated with water scarcity. (For more information, see How it Works: Water for Electricity.)